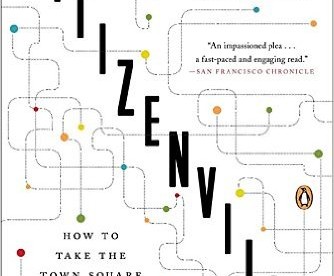 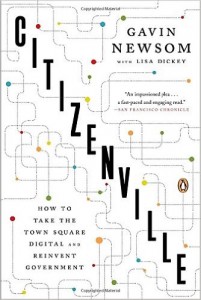 I have learned, as I have gotten older that my relationship with my government is an interesting thing. I did not realize I actually had a relationship with it. If there was a relationship it was one of passive tolerance – it was there, but it was one-way. You know the kind – you can talk about it, but you can’t talk with it. If I did what kind of response would I get? A campaign donation request? A Facebook reminder of voting day? A snail mail brochure outlining new tax obligations?

It is because of thoughts like those that Gavin Newsom, former mayor of San Francisco write the book “Citizenville” in 2013. It may be a couple of years old, but its message rings loud and clear. Technology has changed the expectations of citizens in their government and so is changing the relationship between citizens and government. Throughout the book Newsom provides examples of what has been done and what can be done, as well as some obstacles, political, financial, and other, that have led to some failures and a lot of resistance form government entities.

Newsom believes that technology in government is more than just improving their websites. That’s a necessary start but digital government needs to go further. Why? His answer is laid out in four recurring themes of our current environment: the ubiquity of social media; the changing expectations of a new generation of tech-savvy Americans, the popularity of games and competitions, and the willingness of people to spend time and money on these new pursuits. (pg. xix).

Newsom emphasizes that government needs to engage its citizens. If we want people to engage with government, we should use the same tools that are getting them engaged with companies and institutions in private life. (pg. 101) He offers up using gamification – gaming mechanics – as one strategy to get citizens excited about government and improving their communities and their lives. How can we take seriously the suggestion that games are the answer? Here’s how: we have to meet people where they are. And where they are right now is playing games and spending time on social networking sites. (pg. 121)

One message that also came across clear is that as government adapts to the new realities of technology and a digital space – such as open data, privacy concerns, fiscal transparency – citizens need to also reflect on and change their expectations of government. We have to disenthrall ourselves, as Abraham Lincoln used to say, of the notion that politicians and government institutions will solve our problems. The reality is, we have to be prepared to solve our own problems. (pg. 199) Newsom is convinced that citizens want to be more active in their government and in their communities. That government should be a convener, a platform, a provider of essential data and then let citizens lose to create the solutions – apps, programs, etc. – that best addresses their needs. His question for citizens is: What kinds of things are done better by people doing them themselves as opposed to government? (pg. 185)

Newsom does go into detail of some of the Obama Administration’s initiatives, including open data and government transparency, as well as the impact of WikiLeaks and the Snowden disclosures. He offers points on privacy in terms of government being steward of the information taxpayers have paid for. He reminds us that when we talk about government, we’re talking about neighbors, family members, acquaintances, friends. Government is not some amorphous evil “them.” Government is us. (pg. 16) and that one of the biggest hurdles in getting people excited about government is overcoming this pervasive notion that government is somehow separate from everyday life. (pg. 173)

Newsom brings home the point that what happens next in our relationship with our government depends on us – those we elect and put in positions of authority and us, the everyday citizen. We, as citizens, have an opportunity, with social networking and new technology – to participate in ways never before imagines. And government has an opportunity to meet the needs of its citizens – us. In short Newsom suggests that we can follow Theodor Roosevelt’s maxim: The government is us; we are the government, you and I. Are we up to the challenge?

For more on book “Citizenville” and author: