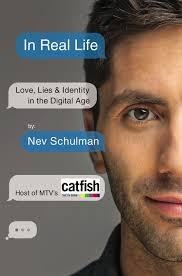 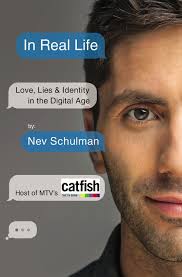 Who are you? Do you know? Can you tell me in 140 characters or less? So many of us try to do so in our briefest biographies for our Twitter profile. It is an interesting exercise in crafting a perception of ourselves for our readers – can we make it enticing enough so that they will follow us, or follow us back, especially after we followed them?

“The truth that no one likes to admit it that we all lie online to varying degrees. Dishonesty in social media is at epidemic levels.” So states Nev Schulman in his new book: In Real Life: Love, Lies & Identity in the Digital Age. Are we lying when we strategically select the words to describe ourselves in our profile or is lying too strong a word? Maybe we are just spinning the truth a bit – just like the big advertising agencies do for the millions of brands out there. And aren’t we told over and over again how important reputation management is in this digital world we live in?

Schulman’s message is focused on personal relationships and presented through the lens of “catfishing” – the act of pretending to be someone you are not, using Facebook or other social media to create false identities, particularly to pursue deceptive online romances (pg. 24). He is considered an credible subject matter expert in this because he was catfished himself which led to a documentary, an MTV reality show and this book.

I will confess I found the documentary intriguing and have been caught more than once captivated by the TV show, mainly questioning how can these people be so vulnerable? Schulman’s book does a lot of explaining and in a voice that rings true to his generation of digital natives. As he lays out the facts and perceptions of catfish, he also explores the reasons why all face-to-face communication has taken a back seat and laments what we have lost in the process. “But why do we really love our social media? It’s because online we don’t have to deal with the awkwardness of real-time interactions and rejections; we feel safer behind the screen – a nonphysical way of interacting…That’s why the Internet is so successful: it took something difficult – human communication – and made it easy. It took away the vulnerability.” (pg. 89 – 90).

It is not that big a leap to take Schulman’s words out of the personal context and apply it in the world of business – after all, what is business but a series of interactions by people with other people creating purposeful relationships for producing successful results? It has been noted how much the Internet and social media has blurred the line between the personal and the professional. Businesses struggle with this issue as they draft social media policies and try to balance the rights of their employees in terms of freedom of expression and the National Labor Relations Act, and their own right to protect their reputation, their client’s confidentiality and their business. Many an employee has lost a position because of a mis-Tweet or an “inappropriate” Facebook status post.

“Everything that you post, text, and tweet can be used against you in the future.” (pg. 116) I tell my clients that you should consider what you post as permanent so think many times before posting. It is a core legal (and moral) principal that you are responsible for what you post. But what this brings up is the very nature of the kind of society this technology is developing – a public one – where everything we do, say, eat, achieve, lose, feel, etc., etc., etc. gets put online to be consumed by others – so we can entertain them, distract them, or annoy them, and they can then laugh, delete, or judge us. Schulman’s words again: “It’s as if capturing the moment and sharing it later on is more valuable than actually being there. Without the proof that you were there, uploaded for other people’s approval, your experience somehow doesn’t count.” (pg. 217)

As you can see Schulman delves into many areas – you can’t restrict identity in a digital age – it does not fit neatly into one category or another, and as the Internet becomes more and more pervasive the boundaries of our identity expand as well. To the point that it is no longer only ours to define. And that is the one point that I would add to Schulman’s treatise from the business perspective. Business are told that social media and online activity can help them target their audience better to engage, connect, and ultimately convert them into buyers. So much of what businesses do online are based on what their users want from them. The users are defining the brand. Is that what we are doing as well on a personal basis? Defining our identity by what our “friends” or “colleagues” want? Is your Twitter profile who you are or who your followers want you to be? To tell the truth, I have no easy answer to that one.

For more information on Nev Schulman, his projects and this book see: http://www.nevschulman.com.

** Law2sm is an Amazon Associate and income may be earned off the purchase of these items.