The IoUC theme for September is “Robots.” As part of the IoUCrobot theme and our exploration of the unintended consequences robots and robotics are having on our society,Tom and I selected two books about robots for the IoUCBook Club. I picked “Rise of the Robots” by Martin Ford, and Tom chose “Humans are Underrated” by Geoff Colvin. By our choices you can sense who is more skeptical and who is more alarmist!

Our selections are interesting because, at first, the books seemed to be at opposite ends of the issue concerning robots and the future of work. As it turned out, though, they ended up being in agreement more than not: both presented the potential problem of robots taking over our workplaces and leaving humans jobless (and therefore poor), but neither offered solutions or a pathway to create a different outcome that seemed feasible in our current political and economic climate.

I put some of my thoughts about the books below. Interestingly, these thoughts raise more questions than answers. I am also providing a number of online resources relating to the books and their authors to help you delve more deeply into the robot topic. 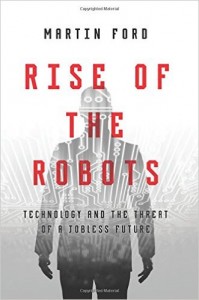 Rise of the Robots

As I began this book, I realized I had been duped. I really thought I was going to be reading about robots, robot history, robot applications, etc. The book delivered all that. But it was really a book about economics and, to tell the truth, if I had known that I probably would not have selected it. However, I am very glad I did, because it turned out to be a book about economics that I could understand. Once I understood that, I realized how important the messages in this book were.

First, you have to understand that Ford uses “robots” to encapsulate all matters of high-level technology, from ATM’s to industrial arms to Watson, IBM’s brain (read: Artificial Intelligence) computer that beat the champion on Jeopardy. Second, Ford is concerned that when this technology takes over our jobs (and he’s not just talking blue collar – he gives examples of doctors and lawyers being substituted by computers), our purchasing power (i.e. wages) will be gone. Without purchasing power, there will be no one to purchase the products and services computers have to offer.

Here are some quotes that emphasize this point. The last one is concerning as it lets us know that all this economic doom will not happen now. Was Ford trying to make sure people don’t panic and riot? Maybe we shouldn’t riot, but I definitely think we need to address a potential jobless future.

For more on book “Rise” and author: 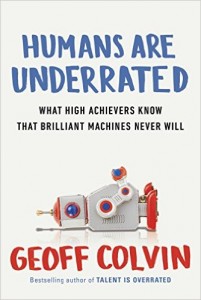 Tom let me know about this book when he read a review in The Wall Street Journal called “Never Trust a Robot” (August, 2015). It’s subtitle “What High Achievers Know that Brilliant Machines Never Will” should have given me a clue that this was not the “robot” book I was looking for either.

Unlike Rise, this is not an economics book. It is a leadership book focusing on interpersonal communication, group effectiveness, and the lamentation of a decrease of empathy in humans, this last being the key to the crisis of computers taking our jobs.

For Colvin the very nature of work is changing, and the skills that the economy values are changing (pg. 4). Colvin agrees with Ford as to how advances in technology, artificial intelligence and robotics will eliminate a huge number of jobs in the economy. However, unlike Ford, who sees that the ultimate crisis will come because of income inequality that will be exasperated by the technology (economics), Colvin believes no such crisis will happen if people learn to be more human (social).

Colvin states “the new high-value skills are…the abilities that literally define us as humans; sensing the thoughts and feelings of others, working productively in groups, building relationships, solving problems together, expressing ourselves with greater power than logic can ever achieve. (pg 4) These are things humans do better than computers, therefore leaders should hire humans for positions that require these skills instead of investing billions of dollars in computers. But Colvin’s audience is the CEO, the head of a company who is looking for strategies that lead to profitability – in this case, Colvin is arguing that humanity, empathy, is the key to higher productivity and higher profits. But Colvin does not address the millions of people who do not qualify for jobs at Google or other top 100 Fortune companies.

What about the myriads of those who are in the fast food or hospitality industry? This, I think, is the failure of this book or, maybe it just wasn’t the right book I needed to read to get the answers I’m most concerned about. Either way, the case studies and stories were interesting, and for that I am glad I read the book.

For more on book “Humans” and author:

Mind in the Eye Test: http://kgajos.eecs.harvard.edu/mite/